Casa Batlló is one of Antoni Gaudí’s masterpieces.
It is a renowned building located in the center of Barcelona at civic number 43 of “Passeig de Gràcia”. A refit of a previously built house, in 1904 it was redesigned by Gaudí and it was finished in 1906. The ground floor, has unusual tracery, irregular oval windows and flowing sculpted stone work. There are few straight lines, and much of the façade is decorated with a colorful mosaic made of broken ceramic tiles (trencadís).
The roof is arched and it was likened to the back of a dragon. A common theory about the building is that the rounded feature to the left of centre, terminating at the top in a turret and a cross, represents the lance of Saint George (patron saint of Catalonia, Gaudí's home), which has been plunged into the back of the dragon. Gaudi has been described from Le Corbusier as the “Shaper of stones and iron”. Gaudì had a vision about how to develop his masterpieces which was very close to Visconti's philosophy. Visconti is considered to be a master craftsmanship in giving a shape to precious materials and in transforming them in masterpieces.
Like the genial architect, Visconti has in its DNA a compulsory need to express its creativity by working various materials, giving birth to amazing pieces of art under the vest of writing instruments. We can just remind the Uffizi, the Arte Modejar, the Profile of Time, Salvador Dalì to mention just a few.

This pen created from Visconti artisans is the perfect interpretation of the philosophy which pervades Casa Batlló. Indeed, the owners of Casa Batlló, very enthusiast about the pen deisgn, have given to Visconti the right to present this masterpiece to the world, as ambassador of the essence of Antoni Gaudì. Visconti has used the most sophisticated techniques: from micro-fusion pieces reworked by hand piece by piece, to glossy enameling and iridescent coating to reproduce the tiles on the roof of the building. The careful research of materials, carved keeping the curves and lines of the original building of Casa Batlló, are synonyms of Visconti craftsmanship skills.

The body and the cap are curved on three layers; each one is molded in different materials (Acrylic, Silver, enamel), and representing the facade of Casa Batlló.
On top of the cap as well as on the blind cap the shape is respecting the particular design of the roof (built from small colorful tiles). The roof is arched and was likened to the back of a dragon. The clip (rounded to the left of center and terminating at the top in a turret and cross) represents the lance of Saint George plunged into the back of the dragon. The pen is provided with the famous double reservoir power filler patented from Visconti as well as with the iconic 23kt Palladium nib. The Pen has been developed with the support of the owners of Casa Batlló in Barcelona, which has celebrated the 110 anniversary since the termination of works in 1906. As ambassador of beauty, art and luxury, Visconti has been chosen again to represent the spirit of the famous artist. 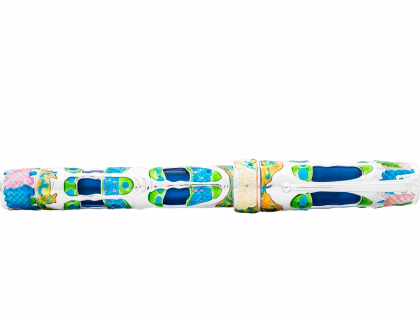 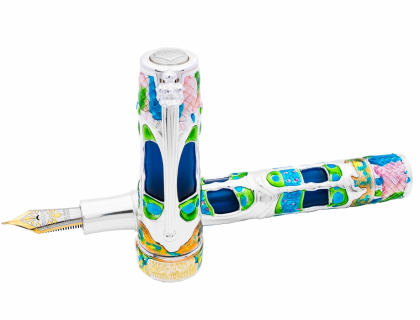 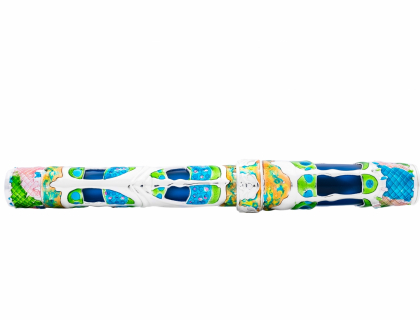